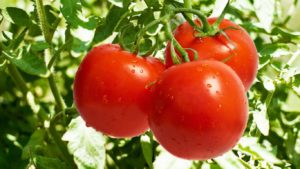 The tomato, native to the Americas, has made its mark on cuisines around the world. The conquistadors encountered tomatoes, called xitomatl by the Aztecs, when they arrived in the New World. When they carried their discovery back to Spain, the name became tomate. From there, tomatoes made their way to the rest of Europe. Temperate regions along the Mediterranean were particularly conducive to growing this sun-loving fruit. On its travels, the tomato found its way into Spanish gazpachos, French salads, Italian sauces, North African tagines and, eventually, Indian curries and other Asian dishes.

In a botanical sense, the tomato is a fruit of the vine. In the kitchen, it is almost always treated as a vegetable. In fact, in 1893, the United States Supreme Court ruled, for the purpose of levying a tariff, that the tomato was a vegetable.

Like the sunny Mediterranean region, Florida has the warm temperatures necessary for cultivating tomatoes. This state’s tomato industry is believed to have started in the 1870s. Today, Florida is the nation’s largest producer of fresh tomatoes.

With almost every southern county in the state cultivating tomatoes, Florida produces virtually all the fresh-market, field-grown tomatoes in the US from October through June each year, and accounts for about 50 % of all fresh tomatoes produced domestically.

Tomato plants are started in greenhouses, and the seedlings are transplanted to fields about five weeks later. One pound of seed produces up to 140,000 tomato plants! As they grow, nearly all the tomato plants are supported by stakes. This greatly increases production costs, but improves yields and the overall quality of the fruit. The tomatoes are harvested by hand roughly 100 to 120 days after the seeds are planted. At the mature green stage, they have reached their full size and contain virtually all of the vitamins and nutrients of fully ripened tomatoes. Following a warm chlorinated bath and rinse, the tomatoes are graded by size and color and shipped to market.

Today, Florida ships more than 1 billion pounds of fresh tomatoes to the rest of the United States, Canada and other countries. That is approximately 1 pound of tomatoes for each person living in India. That’s a lot of a delicious fruit that eats like a vegetable. 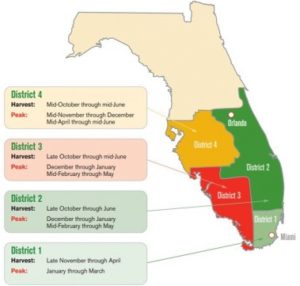