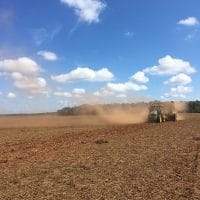 PB&J sandwiches at school lunch, boiled peanuts at football games and roasted peanuts at the county fair are just a few of the delicious memories I have when I think of peanuts. Do you have any of those great food memories?

When most people think about peanuts they think Georgia and there’s good reason for that. Georgia grows more peanuts than any other state, but here in Florida we grow a lot too. In fact, in 2017 farmers grew approximately 185,000 acres of peanuts. Most of Florida’s peanuts are grown in the panhandle, north Florida and southward to just below Marion County, but this amazing crop has been grown all the way down to the southern tip of Florida. 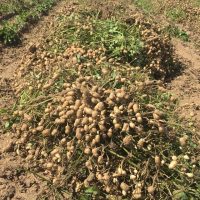 Peanuts are planted in the spring when soil temperatures are between 65 and 70 degrees. Farmers plant specially grown and treated peanut kernels from the previous year’s crop about two inches deep. Peanuts need 120 to 140 frost free days, this is why they grow so good in the south. When the plant is ready for harvest, the farmer waits until the soil has the correct amount of moisture before digging. A machine digs up the plants and flips it over with the peanuts up in the air to allow the peanut to dry. Peanuts contain 25 to 50 percent moisture when they are first dug up and must be dried to 10 percent or less for storage. Because of this even though peanuts can grow in south Florida, they aren’t. There is no infrastructure to dry and store peanuts after harvest, plus there are more profitable products grown in South Florida. 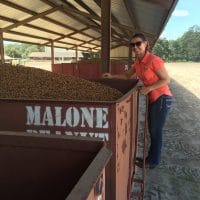 Peanuts are a different kind of nut, they grow underground instead of on trees. Peanuts are classified as a legume, which means they grow in a shell or pod. Legumes are a great, nutritious source of fat, protein and carbohydrates. In Florida, approximately 75 percent of peanuts produced are made into delicious, nutritious peanut butter! The other 25 percent is used for the next year’s seed, snack nuts, peanut candy and peanut oil. Peanut butter accounts for about 50 percent of the U.S. edible use of peanuts and $850 million in retail sales each year. Did you know that the average American eats more than six pounds of peanut and peanut product per year? To learn more about this amazing legume visit the Florida Peanut Producers Association and the National Peanut Board.