#DYK: Bell Peppers come in all shapes, sizes and colors! 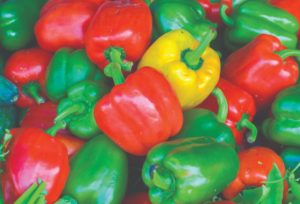 Bell peppers come in a variety of colors. The most common colors sold at local farmers markets or grocery stores are green, yellow, orange and red. But there are also brown, white and even purple varieties of bell peppers. Immature peppers that have not fully ripened are typically green in color. As the pepper ripens, the color changes based on the sugar content of the fruit. As a bell pepper matures it will eventually become a certain color based on the type of variety.
The bell pepper industry is extremely important in the state of Florida, especially in the winter and spring months. Florida growers produce most of the bell peppers sold and consumed in the United States from October to June. Since bell peppers require warm loamy soil, moderate temperatures, full sun and adequate moisture to grow, Florida is a great place to grow peppers during the late fall to spring. Moisture comes in many forms, but in Florida the most common form is rainfall. The Sunshine State receives a yearly average of nearly 54 inches of precipitation though the actual year-to-year totals vary between the northern, central and southern regions of the state.
Because of the soil and precipitation conditions needed to grow bell peppers, this crop is grown in a few main regions across the state. Some of the most productive counties in Florida for bell peppers are: Palm Beach, Hendry, Collier and Manatee counties, as well as Alachua, Dade, Hardee, Hillsborough, Lee, Martin, Putnam, Sumter and Suwannee.

Did you know?
• Florida bell peppers are available from October through June.
• Peppers are considered a fruit because they belong to the family of flowering plants that produce seeds.
• Most green peppers are actually premature red, yellow or orange bell peppers. All young pepper fruits start out green and will change color as they ripen on the vine.
• Florida bell peppers are packed with vitamins, minerals and antioxidants. Yellow bell peppers are one of the richest dietary sources of vitamin C.
• Because bell peppers are mostly water, they provide very few calories.
• When buying peppers, look for firm, shiny and smooth peppers that appear fresh.
• Fresh is best! You can store bell peppers in a plastic bag in the refrigerator crisper drawer for up to one week. Bell peppers that have been sliced can be frozen.
• You can roast bell peppers under high heat in the oven to help bring out their sweetness.
• You can help protect yourself against infection and boost your immunity by including more bell peppers, which are rich in vitamin C, in your diet.
• Peppers are botanically classified as a fruit, just like the tomato.
• According to the Guinness Records, the Carolina Reaper is the World’s Hottest Pepper. This pepper is a cross between a Ghost Pepper, which previously held this prestigious title, and a red habanero.
• Capsaicin is the chemical responsible for the spiciness of a pepper. The Scoville unit is a measure of the “hotness” of a chili pepper. Bell peppers are a sweet pepper and have zero Scoville heat units.

Content courtesy of Florida Department of Agriculture and Consumers Services.